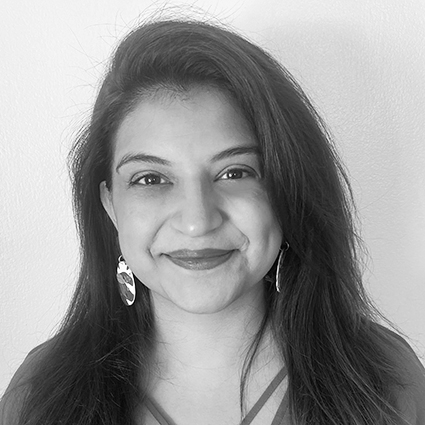 Leea Contractor is curious about Design’s role in preserving endangered cultures. As such, the themes of culture, identity and storytelling drive her practice. She continues to explore these themes as an MDes candidate at Emily Carr University of Art + Design.

Prior to this, she graduated from the Indus Valley School of Art and Architecture, in 2017, with a distinction in Communications Design. She was awarded the prestigious Founders Award along with The Agha Hassan Abidi award, for demonstrating a high level of compassion, humility and generosity towards her fellow human beings.

She was formerly the Associate Creative Manager for the Dawn Media Group in Pakistan, where she was responsible for the design of Dawn’s weekly and bi-monthly publications, as well as special reports for the Group’s daily flagship newspaper.

Leea is also a Fellow of the Cross Culture Program by the Institut FÜr Auslandsbeziehungen, where she worked at Mosaik die Abrafaxe, germany’s oldest and most widely circulated comic book company, in berlin for 3 months.

Leea has a deep interest in the the intersection of design and cultural preservation. Her Bachelor’s Thesis, titled “Jamjoji” is a compilation of food memories and recipes that have been painstakingly collected from the Zoroastrian community. Her project was featured in Design Thinking for Schools: Ethical Dilemmas as well as in Hamazor. Her project was also converted into a zine and sold at FOCAL POINT 2019 Art Book Fair as well as at ART BOOK DEPOT, India’s first ever Art Book Festival.